Screws, plates, rods, pins, wires and frames are commonly metal instruments used in the operative management of fractures. Removing the metal can be considered in certain situations.

Some metal is inserted on a temporary basis- such as a “K-Wire” or a “Half-pin”. Most of the time metal hardware such as plates or nails are left in the body long-term. Mostly, this does not cause a problem and thus can be left where it was inserted. Occasionally, the metal can be felt just under the skin. This can cause irritation particularly if wearing boots or clothes against the scar, and rarely, the metal can potentially erode through the skin. This would require an operation for removal- not as severe as the original one, but an operation nonetheless. Ideally, metal should be left until the fracture has healed. Obviously the procedure to remove the metal would vary in terms of how much metal would need to be removed. The risks of poor skin healing or numbness would apply.If you have concerns about this, contact the clinic and if the fracture is fully healed, the treating physician can consider removing the metal.

Travelling through an airport may cause the metal detector to beep. This varies hugely depending on how much metal is in the body, how close to the skin it is and how close to the scanner it is. Ultimately, if this happens, if appropriate, showing the authorities the scar is usually sufficient as an explanation. If in doubt, discuss this with your doctor. 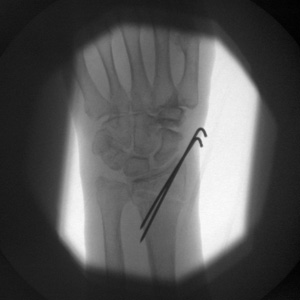 Screws (left) and Plate and Screws (right) in an Ankle